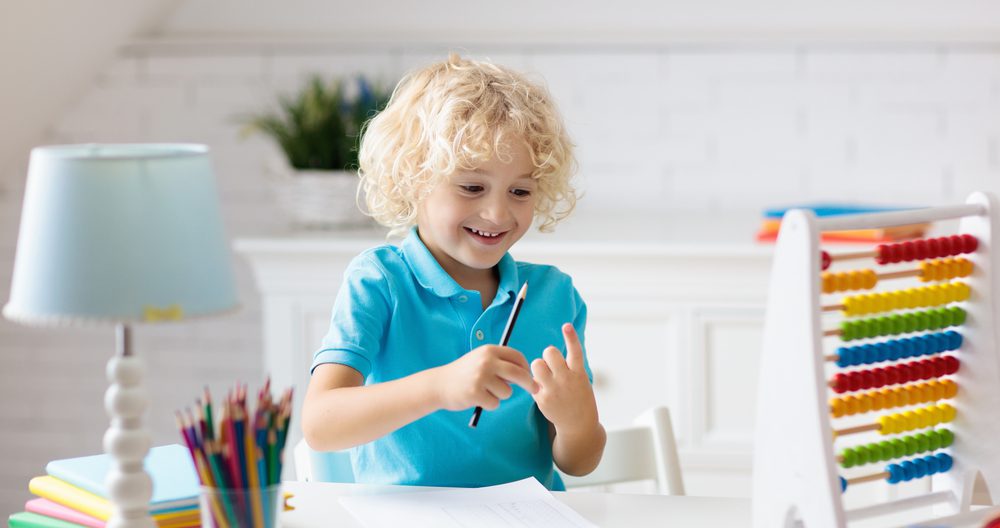 Kindergarten math builds off of the strong foundation your child likely established during their preschool years. The new tools they learn now will strengthen the skills they already have while also exposing them to new mathematical possibilities!

Read ahead to learn what your kindergartener can expect during their school year, as well as some fun and engaging activities you can practice at home.

Depending on where you live, the specific guidelines for your child’s kindergarten math standards may vary slightly. But generally, all kindergarteners learn the same six standards as set forth by the Common Core State Standards.

Before your child can play with addition and subtraction, they need to have a solid understanding of not only number names, but also how numbers relate to one another sequentially.

This means they must understand that we count numbers based on a certain sequence (counting in order, counting backward, counting by 2s, etc.). So your kindergartener should focus on counting numbers sequentially.

They’ll also be able to count out the number of objects they see in front of them. For example, if you’re taking a stroll outside and stop by a rose bush, you might ask them, “How many roses do you see?”

Finally, they’ll begin to understand how to form comparisons between different quantities. If they count 5 roses on the rose bush, you may turn to a neighboring rose bush next and ask if there are more or fewer flowers on this bush compared to the first one.

2) Numbers And Operations Beyond 10

Your child probably investigated numbers 1-10 during their pre-kindergarten years. They may know not only how to count from one to ten forward and backward, but also to appreciate relationships between numbers: five is more than four but less than six.

Once they enter kindergarten, their math will advance up the number line. They will begin to familiarize themselves with numbers 11-20 (while still revisiting numbers 1-10 often!).

Much like with preceding numbers, your child will learn and apply sequential counting to this larger number range, eventually learning how to count all the way from 1 to 20 with ease.

They’ll also be asked to count backward from a specific starting number. This skill will definitely take some practice, but with time, they’ll get there!

“Operations” may sound fancy, but it’s really just an umbrella term for your child’s ability to combine or isolate numbers from groups — in other words, adding and subtracting!

Your child will learn that when they hear the instructions to “add” two or more numbers, they’re really learning how to “put together” these separate amounts to form a combined and larger group.

The opposite is true of subtracting. They will learn that by subtracting, they are “taking away” or “removing” quantities from a group, which makes the original group smaller.

With the basic understanding of addition and subtraction under their belt, they’ll begin applying their operations skills to algebraic thinking.

For example, when presented with a word problem, your child will understand what the problem asks them to do and what operation the problem describes.

This will often include pictures, concrete objects, or other visual representations to make the algebraic process a little more tangible (and easier to comprehend).

Additionally, your kindergartener will begin to understand that objects can be grouped (or broken apart!) in many different ways. This means that although you can make a group of 8 by combining 4 and 4, you can also do it by combining 5 and 3!

As they explore various combinations, they will gradually memorize the different ways you can “make” a number with other numbers.

And that’s not all! They’ll be able to look at a group of objects (for example, 7 squares) and figure out how many are needed to reach a specific goal (3 more squares makes 10).

Your child will work directly with evidence and data in kindergarten math. They’ll be presented with a set number of objects and then draw conclusions about that group of objects.

They’ll also begin to understand how we make judgments about certain objects based on a variety of factors. They’ll learn to categorize objects by shape, size, color, weight, and other distinguishing features.

Not only that, but after making their observations, kindergarteners learn to make comparisons between objects based on these very observations.

Kindergarteners will likely enter their new school year with an understanding of 2D shapes. But there’s always more to learn!

They’ll continue to practice and play with basic 2D shapes while expanding their knowledge of 3D shapes such as cones, spheres, cylinders, cubes, and more.

They may even play around and create their own funky shapes, as well as practice identifying what shapes (2D and 3D) they can find around them in their daily life.

They’ll explore how shapes are different or similar to one another, how they relate to each other (smaller, sharper, etc.), and how they can fit together. For example, they’ll learn that two right-angle triangles can come together to form a square.

Mathematical thinking can include many things! At this stage, it means that a child can begin to use internalized math ideas — rather than memorized facts — to think through new problems and to think uniquely about numbers and mathematical operations.

As this skill develops, your child will learn how to incorporate mathematical thinking into little tasks they may have in their day-to-day life.

For example, if your child’s class is having a party and everyone is asked to bring food, they may come home and use mathematical thinking to figure out what they can bring.

Imagine there is a box of cupcake mix that makes up to 20 cupcakes, but there is also a box of brownies that makes roughly 12 brownies.

Your child may think, “There are 15 people in my class. That means I should make cookies, because I can make more cookies than brownies, and everyone can have at least one.”

This is a fantastic example of how using kindergarten math concepts they learn can help them at home and in real life!

This game works on your child’s counting skills with the numbers 1-10.

If you’d like to try this, put out a bucket or bin large enough to hold at least 10 small balls. You can make “snowballs” out of crumpled pieces of paper if you don’t have anything else that will work.

Challenge your child to throw 10 balls into the bucket. At the end of each round, ask them to count how many balls they made into the bucket versus how many missed and landed outside. For example, they may have landed in 6 balls and missed 4.

They can gather the 4 missed balls and try again. Let’s say they only missed 2 balls this time. Encourage them to think about math by asking, “How many balls are in the bucket now?”

Once they get all 10 in the bucket, their reward can be tipping the bucket upside down and starting all over again!

For this game, you’ll need a few things:

On each piece of paper, write a number from 11 to 20 on the six blank squares. Make sure that you don’t repeat numbers and that you and your child have distinct numbers. That way there are no repeats!

Place all of the index cards face down between you and mix them up with your hands. Then, without looking at the cards, pick one out and turn it over.

Whoever has the number on their sheet of paper gets to cover up their number with a paperclip (or paper) “coin.” The first person to fill their sheet wins!

This game is great for helping with your child’s geometry skills!

First, create a “cheat sheet” by drawing several different shapes onto a piece of paper. It can include squares, rectangles, spheres, triangles, and so on. Don’t be afraid to include both 3D shapes and 2D shapes!

Before you begin the scavenger hunt, you may want to talk about the shapes with your child to make sure they know what to look for. Keep the cheat sheet with you while the two of you try to find the shapes together.

Take a walk around your neighborhood (or house) and see how many of the shapes on your cheat sheet you can find.

You can play this game with a regular deck of cards, but make sure to set aside the face cards (King, Queen, Jack) before getting started.

We recommend starting with cards 1-5 so that the highest sum you can get is 10 when playing. As your child grows more comfortable with the game, you can include higher number cards.

You and your child will each have your own stack of shuffled cards. You’ll play with the stack face down so you can’t see what cards you pull.

For each turn, you will each pull two cards from your deck. Then, on the count of three, you and your child will reveal your cards. You will “battle” your card pairs to see whose pair adds to create the largest number.

Note: this is a simplified number war game. You don’t take the cards if you win a battle; instead, you’ll get a point and then put the cards aside. If there is a tie, you both get a point. The winner has the most points when all cards have been played.

Make sure your kindergartener is the one counting and figuring out which cards are worth more and “win!”

With all of these tips and tricks, we know your kindergartener will turn into one mighty mathematician!

HOMER is always here to help your child develop a lifelong love of learning. We want to remind you that there’s more where that came from — our Learn & Grow app is full of fun math games, along with great reading activities, for your child! 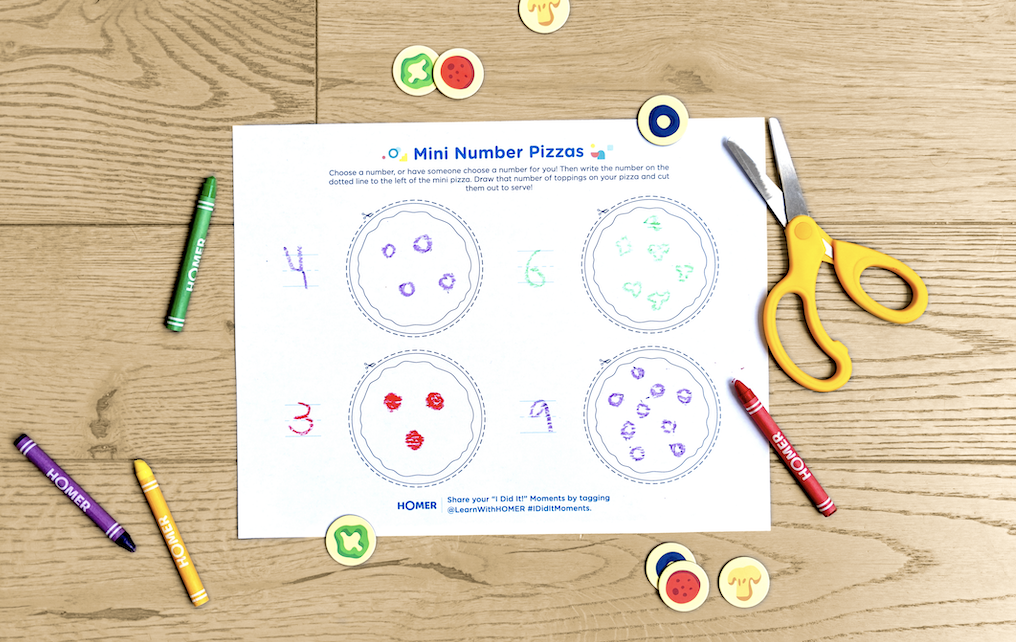 Get ready to put your math skills (and your appetite) to the test with this fun-filled mini pizza-making printable! 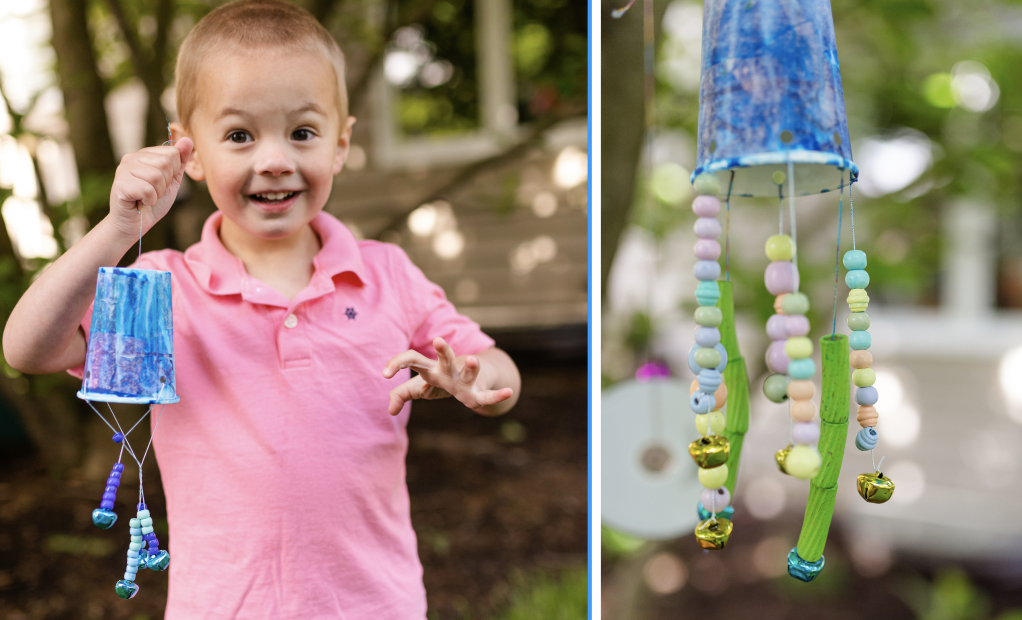 With a few simple materials and kid-friendly directions, you’ll have a colorful wind chime to hang in your yard and the soothing sounds of nature around you all summer long. 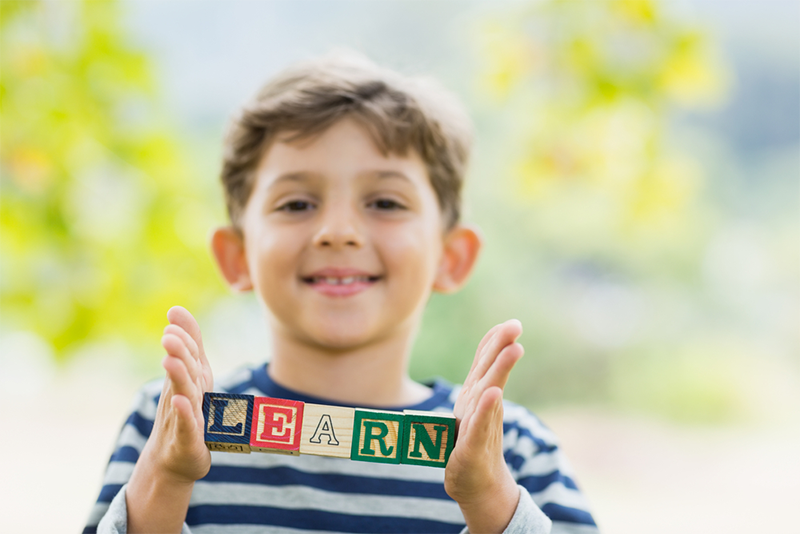 Learn how to teach shapes for kids so your child can develop the skills they need.